A new correctional center will soon open in the west 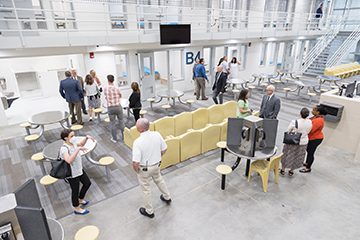 A new correctional center will soon open in the west

Franklin County Commissioners and Sheriff officially opened the new James A. Karnes Correctional Center at 2551 Fisher Road, West Side. The new facility is expected to open later this year and will replace the county’s downtown jail, which was built in the 1960s. It offers 864 beds and a second phase of the new jail will open next year with an additional 426 beds .

“This jail is a heritage project that will serve our community for many years to come,” said Board of Commissioners Chair Erica Crawley. “And the way it can do that most effectively is to provide mental health services, job training and other educational programs so that our neighbors in prison can succeed when they become our neighbors outside the prison. jail.”

The county team responsible for planning the replacement of county correctional facilities partnered with the National Institute of Corrections and traveled the country to visit the most progressive and successful prisons in the country. The James A. Karnes Correctional Center combines all of the best features used nationwide, including mental health and addictions centers, virtual visitation accommodations, natural lighting for inmates and deputies, and l training and programming space to help prepare inmates for their return to the community.

“If you want to know how a community views its people, you need look no further than its prison,” said Commissioner John O’Grady. “And with the new James A. Karnes Correctional Center, we finally have a correctional facility worthy of our community and its residents.”

The new facility is designed to accommodate a new model of corrections focused on strategic inmate management and direct supervision. It is a model in which deputies share space in pods with the inmates they supervise. Each pod has built-in rooms for medical checks or other professional visits and its own recreation area. The space will allow for increased programming, training and education to prepare inmates for success when they return to the community, and the updated philosophy has been shown to make prisons safer for inmates and the personal.

Jim Karnes was Franklin County’s most senior sheriff, capping a 48-year career in law enforcement. Karnes first joined the sheriff’s office as a deputy in the correctional division in 1963 and served as sheriff from 1992 until his death in 2011.

“We know today’s inmate is tomorrow’s neighbor,” Sheriff Dallas Baldwin said. “The vast majority of people who come through our doors will leave the establishment within a few days. The Sheriff’s Office is committed to helping these people get on a better path in the sincere hope that they will not return to jail.

The James A. Karnes Correctional Center spans nearly 430,000 square feet and cost approximately $360 million to build. The facility includes enough concrete to build a sidewalk from Columbus to Dayton, over two miles of plumbing, and its roof covers approximately four acres.