At the refugee center in Poland, the best and the worst of humanity 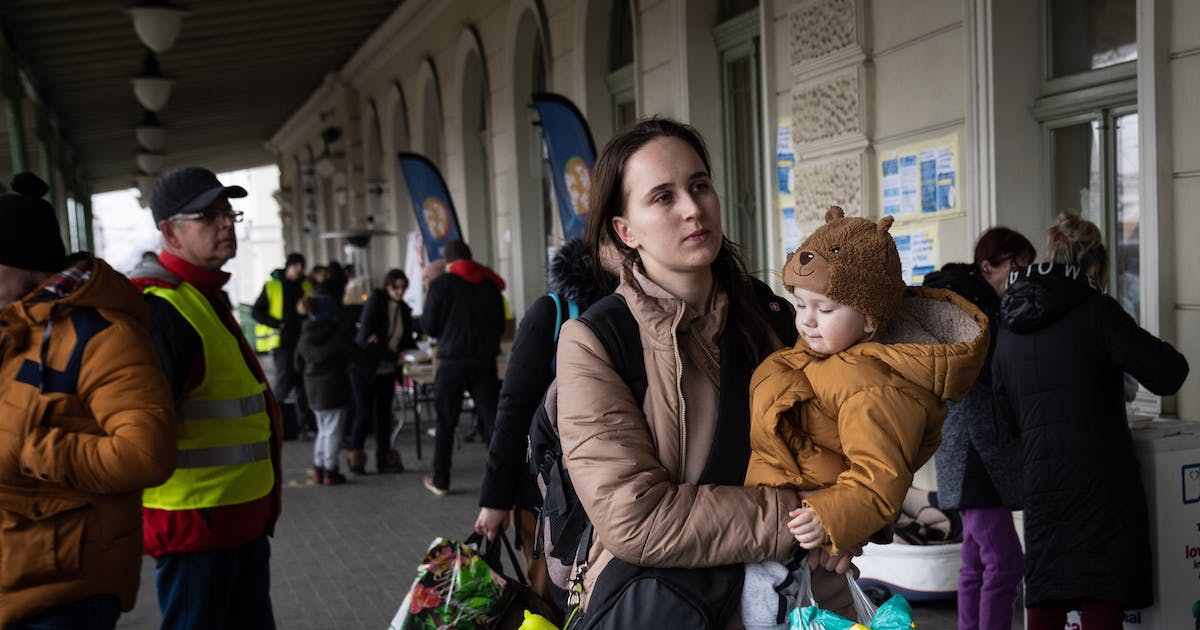 At the refugee center in Poland, the best and the worst of humanity

I recently returned home to Minnesota after two weeks of volunteer work at the Ukrainian refugee center in Przemysl, Poland. I decided to go to southern Poland, a few kilometers from the Ukrainian border, because two friends from Chicago were already there to help the newly arrived refugees. I was inspired by their spontaneous humanitarian action.

The Przemysl refugee center is in a former shopping center along a busy street. Since the start of the Russian invasion of Ukraine on February 24, several hundred to several thousand refugees have been arriving every day. They come from all parts of Ukraine – from Lviv only about 80 kilometers away, from kyiv, Kharkiv and eastern Ukraine.

They only stay at the center for 24 to 48 hours before leaving. The tables are manned by volunteers who help refugees organize their journey by train, bus and van to other cities in Poland or to the UK, France, Germany, Austria, India. Italy, Spain and elsewhere in Europe.

I was not emotionally prepared for my first encounter with the refugees. They are mostly young women, carrying their children in their arms and dragging suitcases or large plastic bags containing personal belongings they may have gathered while fleeing the war zone.

An elderly woman is sitting in a wheelchair, holding her head in her hands and crying softly.

Many left behind fathers, husbands and brothers who continue Ukraine’s fight for survival. The only men seen are older, or have physical or mental disabilities that make them unable to join the fight against the Russian invaders. Ukrainian President Volodymyr Zelenskyy has banned able-bodied men from leaving the country.

In the eyes of these refugees, a frightened and blank stare is proof that they have endured the inhumanity of war.

My work at the refugee center ranged from cleaning floors, to setting up cots with clean bedding and pillows, to carrying luggage. I made many new friends among other volunteers around the world and was proud to meet many other Americans, including several more from Minnesota, who could not just sit and watch this tragedy unfold. I felt the deep gratitude of people who need a safe and clean space to sleep after trying days of travel.

On April 8, my friend and I crossed the border near Medyka, Poland, into Ukraine. We distributed chocolates, juice boxes, lip balm and other miscellaneous items to refugees queuing to clear Polish customs. Chocolate seems to be a universal language. It was heartwarming to bring smiles to the children’s faces.

While I was shaken by seeing evidence of the worst in humanity, I was also inspired by the best in humanity. Non-profit and non-governmental organizations (NGOs) such as Spanish chef Jose Andres’ World Central Kitchen, UNICEF, the United Nations High Commissioner for Refugees and others, including faith-based organizations, are working all 24/7 to respond to this man-made disaster. In fact, World Central Kitchen provides thousands of meals every day to refugees and volunteers in Przemysl and places in Ukraine. (By the way, they make delicious borscht!)

We must also salute and thank the Polish people and government for having received so many Ukrainian refugees. It is a country that remembers the German invasion of 1939 which started the Second World War. But even some Poles are raising questions about how many more refugees Poland can absorb.

President Joe Biden has committed the United States to accepting up to 140,000 Ukrainian refugees. It is essential that the United States and other countries around the world meet their commitments to welcome and resettle these refugees to help relieve some of the pressure on Poland and other neighboring countries.

None of us can predict the course of Putin’s and Russia’s totally unjustified, illegal and inhumane attack on the peaceful people of Ukraine. The world must be prepared for the possibility that this conflict could drag on for several months. The current financial and volunteer support for ongoing humanitarian efforts in Poland and elsewhere is impressive, but we must ask ourselves if this essential support can be sustained over the long term? Are we going to succumb to compassion fatigue as time passes and our attention shifts elsewhere?

If we fail to stay the course in supporting Ukrainian refugees, Vladimir Putin wins. If you haven’t already, please consider donating to a credible non-profit organization working to help Ukrainian refugees. As someone once said, it really is “better to light a candle than to curse the darkness”.