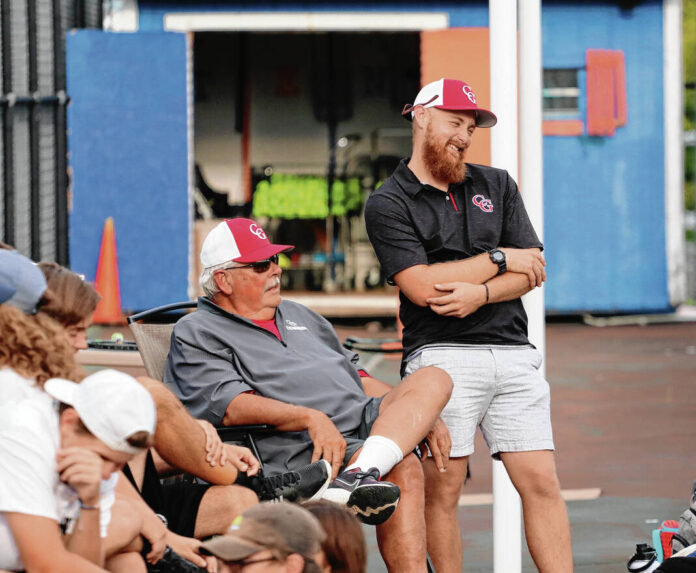 One of the winningest programs in Indiana high school tennis history has a new boss.

And it’s one of his best starts in recent years.

Ivan Smith had ruled Center Grove tennis for nearly half a century. This year, Smith passed the torch to school police officer David Beasley, who had served under Smith for the past three years as an assistant coach.

“I came out of college and didn’t know much about coaching, just playing and being coached by a guy like that was huge,” Beasley said of Smith. “Being able to know what we say to the children during the changes? How do we motivate people, you know, how do we approach every game? Things like that are totally different from being a player and being a coach, so things like that have been great to be under him.

The contrast between the coaches is stark, with Smith, 74, who has never played tennis and Beasley, 25, the all-time leader in IUPUI singles wins.

The pairing was good for the No. 8 Trojans, who improved to 13-1 on the year with a 3-2 victory at Whiteland on Tuesday.

“I think David’s youth helps a lot to increase the team’s motivation,” said elder Evan Davis, who teamed up with Daksh Patel to a 6-0, 6-4 doubles No. 2. “Ivan, he’s still a great coach and stuff. He has more tennis history, but David being a good tennis player, I would say that helps lift the spirits and a lot of things.

Davis and the Trojans still have a taste of both coaching styles, with Smith remaining on the coaching staff as an assistant.

Tuesday’s game, which was decided by Garrett Wasson’s 6-3, 7-5 triumph over Whiteland’s Ty McCullars in second singles, gave Center Grove its best start since Beasley arrived. It was a hard-earned triumph for the Trojans, especially as the team’s top two singles players, Loc Pham and Tyler Lane, sat out with injuries.

“Loc and Tyler sat out a lot,” Beasley noted, “and Max (Williams) and Evan (Davis) sat out some games and Daksh (Patel) as well. We had, I think, 14 or 15 guys that have played varsity games this year. And to be able to have a record like 13-1 is pretty amazing, and just a testament to their hard work over the summer and throughout the year.

Williams and Russell Dean picked up the Trojans’ other point with a 6-1, 6-1 win in the first double. The Warriors got wins from Spencer Gillespie (6-1, 6-3) and Carson Baumann (6-3, 6-2) at the first and third singles, respectively.

The record speaks for itself, but the Trojans have adopted their new coach.