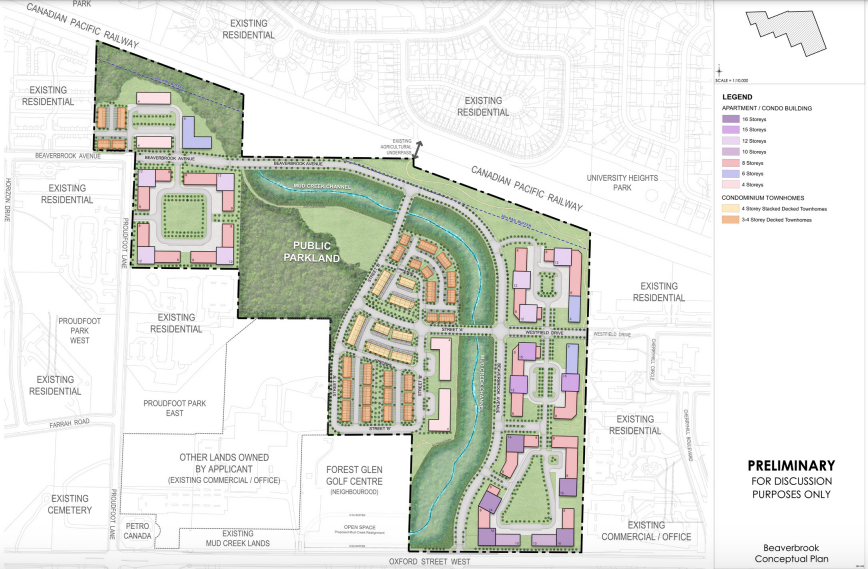 A mega-development that could include a dozen skyscrapers is proposed for west London next to the Cherryhill Village shopping center by the same builder responsible for the mall and nearby apartments.

Plans for 323 Oxford St. W. and neighboring lots on Proudfoot Lane have been in the works for decades, said a consultant working for the Esam Group, owned by the Katz family.

Now the development, which could add thousands of units to the area, is getting closer to reality, with a draft plan of subdivision outlining the medium and high density options being considered for the massive site.

“It’s in the city plan, especially along Oxford. As we plan our city and develop in certain areas, we put those intensities into development, it’s an area where it’s good to see intensity.

Michael Hannay, an MBTW manager who lives in London, said his client was sticking to a plan similar to one approved years ago under a previous official plan for the area. around Mud Creek.

Together, the properties at 323 Oxford St. W. and 92, 825 Proudfoot Lane represent nearly 32 hectares. The final development is not nailed down, but the draft plan of subdivision that forms the application – it has been circulated to neighbors and a rezoning application will eventually land at City Hall – includes mid and high blocks density, green spaces and new roads .

“They are looking at options, lots of options in terms of type of units, number of units and size of units. It is a project that would support the choice of housing in the city.

Conceptual designs show stacked townhouses of three to four stories and more than a dozen apartment buildings ranging from eight to 16 stories.

But water problems have plagued the site for years, leading to decades-long development delays.

“There’s been this whole process of how to deal with water issues. The flooding was huge,” Hannay said.

Development will begin with work to restore Mud Creek and create an “artificial channel” to deal with stormwater and runoff.

The project is an example of development in the rapidly growing West End, where public transport and traffic issues also pose challenges.

“Wonderland and Oxford is a hub, a transit hub, where there are a lot of buses coming and going,” Hopkins said.

“You want to see the intensity happen in this area.”

Sign up to receive a curated collection of links and highlights from our award-winning news coverage, in-depth analysis and unrivaled weekday noon investigative features.

Thank you for your registration!

A welcome email is on the way. If you don’t see it, please check your spam folder.

The next issue of LFP Noon News Roundup will soon be in your inbox.

We encountered a problem during your registration. Try Again