City, the developer helps provide answers to questions about the Lily Springs project 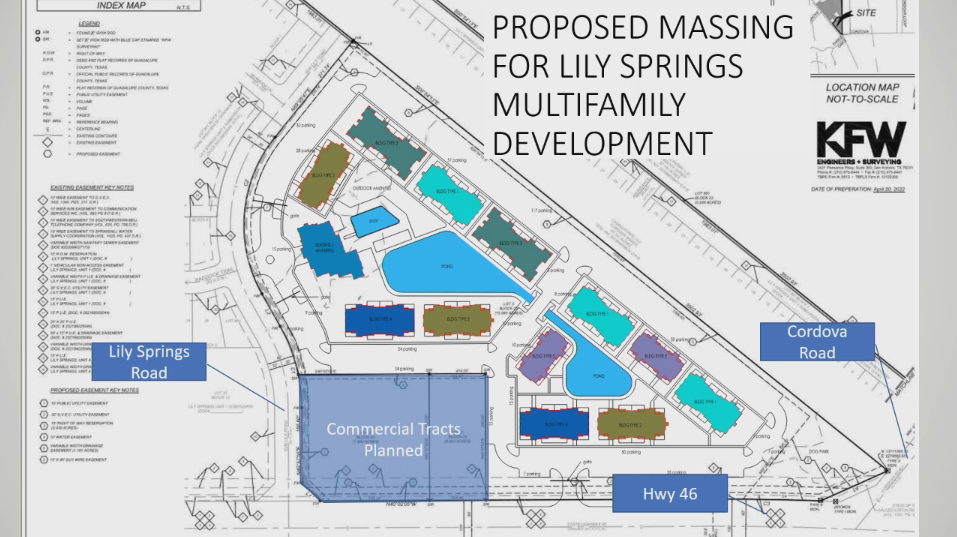 City, the developer helps provide answers to questions about the Lily Springs project

(Seguin) — The complexity of a state law that is being used to build a large new high-end apartment complex in Seguin is raising many questions from the public. Most of the questions raised, so far, focus on how the Lily Springs apartment complex will be funded, what impact it will have on existing ratepayers, how it benefits the city, what benefits – if any – does it offer to ISD Navarro, and does the city have the infrastructure in place to manage the project. Many of these questions were answered during a recent presentation on the proposed $58 million project, which would be built at the corner of State Highway 46 and Cordova Road.

Seguin City Council last week approved a partnership between the city and private developer, Vaquero Multifamily LLC. The city is in the process of creating a Public Facilities Corporation (PFC), which will allow the city to take ownership of the project, but it will be entirely financed by Vaquero. The partnership is considered workforce development housing and will create 288 units that will be marketed to middle-class workers, such as teachers, firefighters, police officers, government workers and much of Seguin’s existing workforce. City officials say the housing is desperately needed and will be a “Class A” project, meaning it will be one of the highest quality buildings on this market, that it will include superior quality equipment and that it will attract high quality tenants.

The city’s interest in this agreement is represented by attorney James Plummer of Bracewell. Plummer recently explained the state law that allows for the creation of PFCs and how it benefits communities across the state. He explained that the city will own the project, but that all financial elements will be financed by Vaquero. Plummer says the city will receive $500,000 at closing, but for the duration of the agreement, the city will continue to be paid.

“This will be a 75-year lease between the PFC and a subsidiary of Vaquero. The rent for the lease will consist of rent paid in advance and an amount equal to the cost of the land. The land is about $4 million and we have to buy the land but you don’t put any money into it so the way we do it is we do the lease and on the first day they pay you enough money so you can buy the land and it’s paid for throughout the lease and that’s all their fees,” Plummer said.

If Vaquero puts all the funding together, then the question becomes: what’s in it for them? Why is this a good deal for Vaquero?

Plummer also talked about it in his presentation. He says Vaquero will build the project and lease the apartments, then likely sell his stake in the building. The city would still own the project, but the value of the building is expected to increase significantly in the first few years.

“They are going to build this building. They are going to stabilize this building and they are going to sell this building. Their building cost is $58 million. They predict that in five years, and it will be between 3 and 5 years, they will sell this building for 78 million dollars, and this increase is not an increase only because of the increase in real estate. It is an increase because the risk of construction has disappeared. The rental risk has disappeared. They will have an established net supply income and that is how much the building will be worth. We’ve actually seen these sales happen very, very regularly. The value of the building increases by 20 to 30 million dollars as soon as it stabilizes because these risks have disappeared. So when they sell that building, you’ll get 15% of the balance of the proceeds after they’ve paid off their loans, paid off their associates and that’ll probably happen in the third or fourth year depending on what the real real estate market is as. At that point, they are currently predicting that you will receive $3,480,000 as a 15% share,” Plummer said.

Plummer says the risks associated with the deal are limited because the city’s PFC will continue to collect rent under the lease, which will continue to provide a source of revenue for the city. Plummer says the project won’t pay ad valorem taxes because it’s owned by the city, but the law requires the city to be compensated for any taxes it loses during the term of the agreement. The developer’s rent payments will make this possible.

“Net cash rent starts in year four, and we choose year four because it takes two years to build, one year to stabilize the project – it’s 90% occupied. Then they will start paying you rent at the greater of 25% of the annual tax savings, which is what the tax bill would have been if this project was taxable; or 25 percent of their net exploitation Income. The reason we choose 25% is that if you look at the school, county, city tax stack – the city is usually about 25% of that stack. I believe in your case; it could be 23 percent. This is an annual payment and is designed to ensure that you as a city collect the same taxes you would have if this building were taxable. So the annual rent will pay the equivalent taxes,” Plummer said.

The apartment complex is within the city limits of Seguin, but it is also within the limits of ISD Navarro. Several Navarro ISD families took to social media this week to raise concerns about the impact the project would have on their neighborhood. The building will not pay property taxes, but the resort is required by law to pay ISD Navarro a flat fee for each student residing in the resort each year. City Manager Steve Parker says the project not only provides much-needed housing, but also helps put Seguin in a better place to attract new business, especially retail opportunities to the community. He says it benefits everyone, including Navarro’s ISD folks.

“They get $7,000 per student who resides in this (complex) state. This is the state’s way of encouraging labor housing in the community. I also personally think it helps teachers in grades one through three and it’s going to create more density and we know we’ve had a lot of developers looking in Corridor 46, Rudeloff, Cordova Road and the denser that area , the more shopping that’s going to come in there, which will definitely benefit the Navarro school district, so I know there may be some pushback from the school district on that,” Parker said.

The law that authorizes PFCs tries to offer protections to the public entities that create them, because these public entities represent the taxpayers of these communities. Plummer says that’s why the city’s interest will be protected even if or when the building is sold.

“And then, as it is a 75 year contract, every time they sell in the future, you will be paid 2% of the gross commission. So the first sale is $78 – if the second sale is $100 million, you will be paid $2 million on that sale as a commission to continue being involved in the project,” Plummer said.

This money would go entirely to the PFC but could be used by the city for any public service or need. The city of Cibolo has one of these apartments, also located in the ISD Schertz-Cibolo-Universal City. Plummer says the project has worked well. He says Cibolo used some of the money he received to build a fire station. He says this is just one example of how the funds could be spent by the city.

Plummer also touched on another big question: what if the project fails?

He says this is a real estate transaction and if foreclosed, the city and ISD of Navarro would still benefit as the property would then be on the tax roll and subject to the payment of taxes land in the future.

The City and County of Guadalupe already have plans in place to make major improvements along Cordova Road between Highways 46 and 123, so the infrastructure issue is already being addressed. City officials say they also plan to use the $500,000 they receive at the close of the deal to fund a portion of needed improvements along Link Road near the Navarro ISD schools.

The city council last week unanimously approved the deal, meaning Vaquero can now move forward with its plans to secure funding for its joint venture with the town of Seguin.