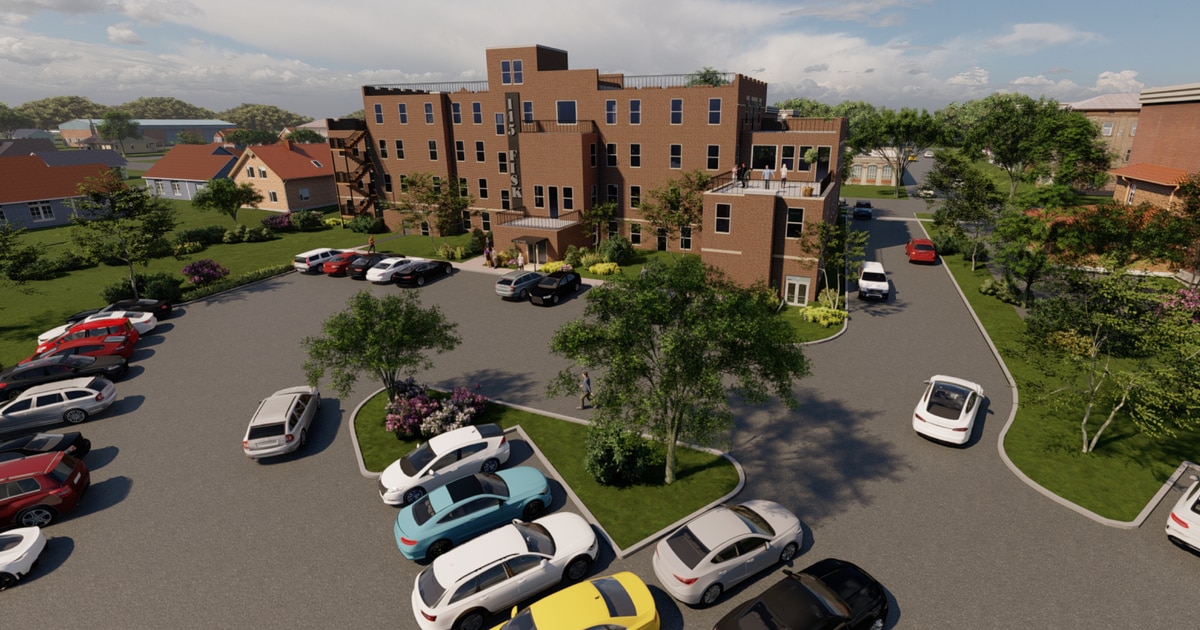 Early comments on plans to build one- and two-bedroom apartments inside the 30-year-vacant 145 Fisk Avenue included questions about housing needs, capacity and how it would fit in in the neighborhood. Developer Jon Sauser was on hand at the City of DeKalb’s Planning and Zoning Commission meeting on Monday to answer questions related to his plan. Commissioners did not vote on any official plan on Monday, but offered a first round, broadly favorable to the proposal.

Sauser said the idea is to maintain the character of the neighborhood and breathe new life into the building, built in 1922, which sits near the corner of neighboring Fisk Avenue and First Street homes and other rental units.

“The goal is to keep it quiet … and in tune with the neighborhood,” Sauser said.

Longtime DeKalb resident Clifford Cleland, who lives in the 500 block of South Second Street, said he was in favor of the proposed project. He did, however, ask Sauser several questions, including whether the city had a large enough market for the type of apartments Sauser offered.

This is an inquiry that has previously been raised regarding apartment projects in DeKalb. In January, another top DeKalb developer, Pappas Development, won city approval to begin construction on a $6 million, 61-unit apartment complex at 1381 Barber Greene Road, near from the corner of Sycamore Road.

In response, city staff from Sauser and DeKalb confirmed that one-bedroom apartment projects like those at Pappas Development are fully occupied.

“That’s a good sign,” Cleland said in response to Sauser.

The four-story, 24,000-square-foot property sits on approximately 1.3 acres of downtown DeKalb blocks. According to city ​​documents released last weekthe proposal was submitted by Sauser for the building, which was most recently used by DeKalb School District 428 until 1992, and has remained vacant ever since.

Sauser has been a property owner and developer in DeKalb for years. In 2017, he sold rental properties, now known as Hunter Star Properties, on the north side of DeKalb to Evanston-based Hunter Properties.

Robert Carlson, a longtime DeKalb resident and local owner, voiced his support for the project on Monday and announced what he said was the experience of local and state Sauser owners to back up credit for the plans. Carlson said his family also owned apartment buildings nearby. He said his buildings and Sauser’s proposal would have a similar occupancy density.

“It’s very consistent with what I have,” Carlson said.

If Sauser’s proposal goes ahead, a formal review of the development and zoning plans will have to be presented again to the commission, and then for a city council vote in the future.

Residents also expressed concerns about whether the project would affect surrounding property values. In one project summary document released this week, city staff said the proposal would lift long-vacant and deteriorated property in the neighborhood.

Although the building is 100 years old, Sauser’s apartment proposal does not include a demolition plan for the existing structure. According to city documents, the space is mostly gutted inside.

Sauser’s development would add modern amenities and upgrades to the north side of the building, according to the documents. Plans include a dedicated mail and package room for receiving packages, security cameras for the building, a tenant lounge, an exercise room with cardio and weight machines, and an outdoor patio with a grill. natural gas.

Each unit would have 10 to 12 foot ceilings, a washer and dryer, central air conditioning, a dishwasher and quartz countertops, according to the documents. The plans would also retain “as many existing, mature trees as possible” in the surrounding area and update curbs, gutters, sidewalks and exterior LED lighting, according to the developer’s plans.

Commissioner Trixy O’Flaherty said she thought Sauser’s proposal would be a good use of the building.

“I like to see old stuff kept…and improved in all the right ways,” O’Flaherty said.

Exterior plans for the proposal include changes to street access for a proposed parking lot that would hold 65 spaces. DeKalb’s city code requires 57 parking spaces for the number of units offered, according to the documents.

City staff confirmed Monday that they had not identified any major concerns with the preliminary concept plans. However, additional review should be done on engineering and stormwater management before final approval.

The developer will also be required to submit a traffic analysis to determine the impacts that could occur on Sycamore Road and Fisk Avenue if the apartment complex were built.

The building was constructed in 1922 as St. Mary’s Hospital, which closed in 1965. It served multiple purposes thereafter until 1993 when the building was sold and rezoned for multi-family residential use. In 2006, Midwest Estate Development LLC purchased the building and has owned it ever since.

The original plan was to convert the old hospital into luxury lofts – a proposal that also failed to materialize, documents show. A 2019 proposal for the building led to a lengthy legal battle between a developer and DeKalb City Manager Bill Nicklas.

The building located at 145 Fisk Ave. no longer falls under any TIF district in the city, following the closure of the city’s second TIF district.