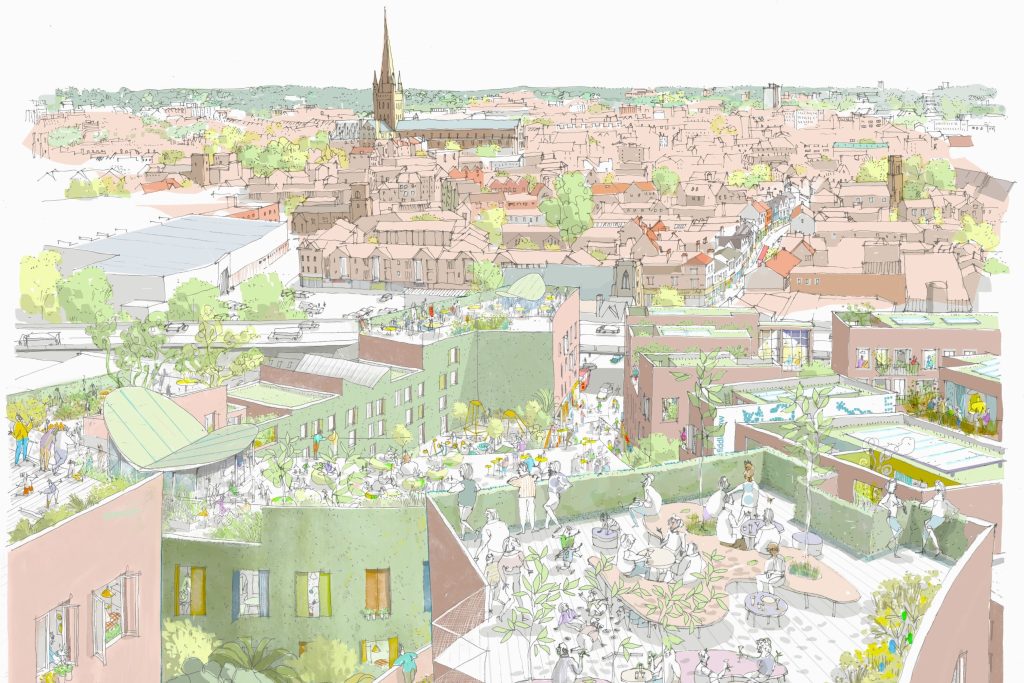 Last week SAVE Britain’s Heritage and Ash Sakula published an alternative concept to the developer’s 1,100-house proposals to redevelop the medieval heart of the city. The campaign group says the Broadway Malyan scheme, which was resubmitted in April, would ‘overwhelm and overwhelm’ the conservation area of ​​Norwich city centre.

Recent changes to an original £270million, 1,250-home plan by Weston Homes – the original request was turned down by then Housing Secretary Robert Jenrick in late 2020 – have not been successful to win over conservationists, prompting SAVE and Ash Sakula to come up with their rival concept.

The pair said their Anglia Square Alternative Masterplancomprising 773 apartments, mostly two bedrooms, would be ‘a friendlier, contextual, low-rise development based around streets’.

However, Weston Homes hit back, saying the proposal would require more than £100million in government grants to get started and lacked “financial credibility”.

The developer said in a statement: “Nowhere in the 40-page document of [alternative masterplan] proposals is there any information on how the Ash Sakula Architects program will be funded; nothing on build/build costs; nothing about how the project would be phased or delivered; and nothing on the financial viability of the proposal.

He added that the competing proposals did not take into account the commercial constraints of existing land and rental property.

Weston Homes said it had spent £6million on the public consultation and planning process so far and its current designs had been informed by extensive consultation, including nine days of public displays.

Our current regime is marginally viable and without excessive profit

Bob Weston, President and Managing Director of Weston Homes, said: ‘Our current scheme is marginally viable and without excessive profit and most importantly the proposals are based on extensive consultation with local people and we have listened to all key stakeholders .

“Weston Homes remains firmly committed to finding a viable future for Anglia Square, which has the support of the people of Norwich.”

Steve Hatton, Director of Planning and Design at Weston Homes, added: “Ash Sakula Architects’ proposals are based on a few months’ work centered on concept sketches and proposals that twist a complex brief.

“In our opinion, none of this is financially viable and [it] does not have the support of the site owner or funders.’

The alternative vision for SAVE builds on earlier plans, also designed by Ash Sakula and commissioned by Historic England, which were presented during the public inquiry into Weston Homes’ previous proposals for the site in 2020.

It would provide a continuing home for the local crafts charity The Men’s Shed, as well as a community hall, 48 new workshops, artists’ studios, shops and a supermarket.

Ash Sakula’s vision would also retain the cluster of historic buildings around Pitt Street at the south-west corner of Anglia Square – three of which have been submitted to Historic England for a potential listing – which have survived both World War II bombing and redevelopment of the area in the 1960s.

Responding to the Weston Homes campaign, SAVE said it stood by its view that the Broadway Malyan scheme would be a “monstrous anthrax on the face of one of England’s finest cathedral cities”, adding that the project would also need public funding ‘in the form of a £15m grant from Homes England’.

Marcus Binney, executive chairman of SAVE Britain’s Heritage, said: ‘It is nonsense to say Weston Homes schemes are the only formula that will work.

“There are many examples of different designs and types of new housing in Norwich, some of them close to Anglia Square. Many of them are in blocks of three or four stories, not the eight stories offered by Weston Homes.

“Norwich youngsters don’t want to be crowded into airless coops.”