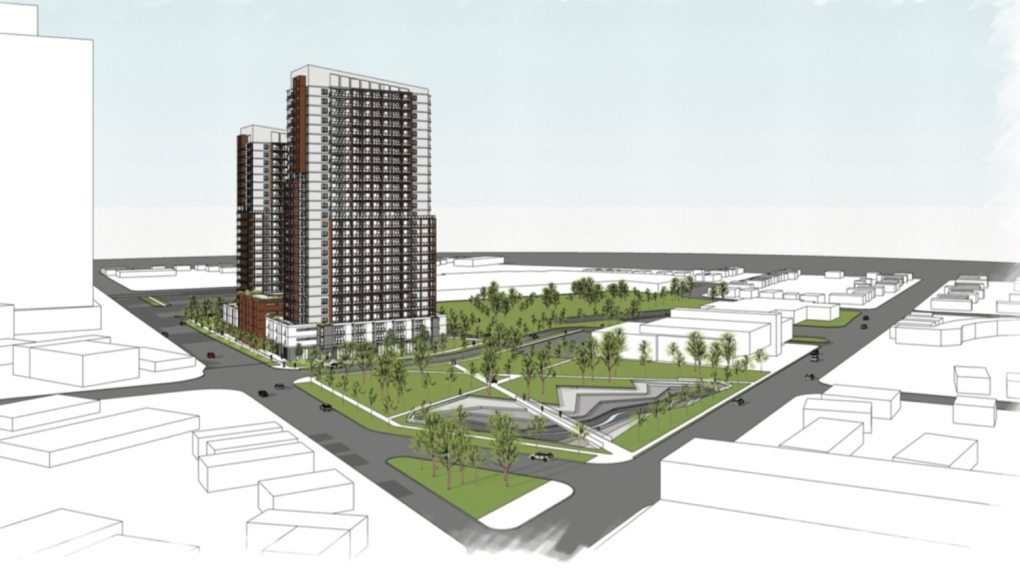 On Tuesday, HIP Developments held a public meeting, inviting residents to view its new construction plans for a 29-story tower and a 25-story tower on the former Barrie Central Collegiate property.

The apartment buildings would include 623 units in total.

“I think we’ve approached Bradford Street as an urban front. We have Prince of Wales Park as part of the plan, so a lot of the things we had before, we’re just building on that,” said Scott Higgins, President of HIP Developments.

The Waterloo-based company purchased the Dunlop Street properties from the Simcoe County School Board for $5.8 million in 2017.

The project initially included three residential towers with a total of 600 units.

Last summer, HIP scrapped its initial plans after a supervised consumption site was proposed near the Innisfil Street site.

“It required us to push the front of the residential density towards Bradford Street where the Y was,” Higgins said via Zoom.

The new YMCA is now set to be built on the H-Block on Worsley Street near the public library.

The Simcoe County branch of the Canadian Mental Health Association told CTV News in an email that it had submitted several letters and was awaiting approval. No timeline was provided.

Barrie City Councilor Keenan Aylwin defended the supervised consumption site and said he was disappointed the developer had decided to put the project on hold, but was hopeful for the new design.

“Hopefully we can push the developer to include affordable housing in this project because we are facing an intense housing crisis in this city,” Aylwin said.

As for affordable housing, Higgins said they are including multi-bedroom units in the towers, but the current market and supply chain present challenges.

“At the end of the day, when you’re doing one or two bedroom apartments for $400, $500, $600,000, that’s the most affordable housing you can bring. I’ll be the first to agree that nothing is more affordable,” Higgin said.

In the meantime, the project will go through a staged approval process, with the city asking for community feedback.

“The applicant will review these comments and attempt to respond to them to the extent possible,” said Michelle Banfield, Director of Development Services for the City of Barrie.

During Tuesday’s developer meeting, several people shared their concerns about what they would like to see included in the project.

The lack of grocery stores in the neighborhood was a topic that came to mind for many.

HIP Developments said that if they couldn’t include it in their design, the project might attract a grocer to set up shop.