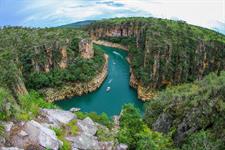 Until recently, Atlas was primarily a solar developer, but branched out into wind earlier this year.

In April, it signed a power purchase agreement to supply Enel Generación Chile with 1.3 TWh of electricity, per year, from three wind farms with an installed capacity of 417 MW.

In June, the company acquired the 378 MW Juramento wind project in the Brazilian state of Minas Gerais from France’s Voltalia.

The company is the second largest renewable energy developer in Latin America and until recently focused on solar energy, operating fourteen facilities in Brazil, Chile, Mexico and Uruguay with 2.3 GW of capacity installed.

“The sale of Atlas marks our fifth renewable platform exit in the Americas, where we have now built and owned over 7 GW of wind and solar capacity under contract, making Actis one of the largest private investors in the region’s energy transition,” a spokesperson said. for the company said.