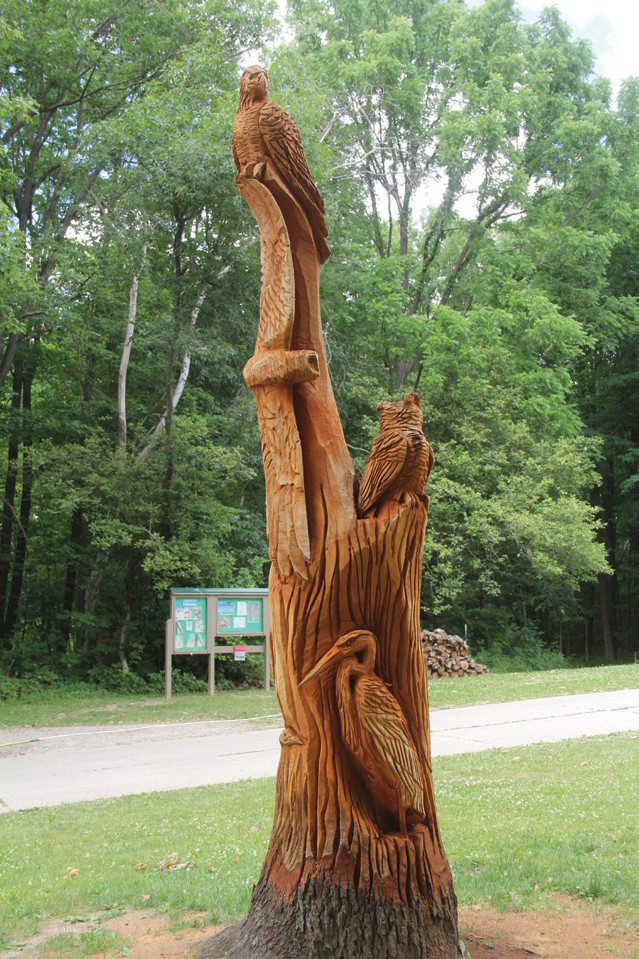 (Left) The Bird Tree statue at the Robert Williams Nature and Historical Center in Davison Township. Photo by Gary Gould

DAVISON TWP. — Pulling the cord to start a chainsaw may seem like the start of a great gardening project, but for Steph Collin, it may just signal her next sculpting masterpiece.

The sculpture was not made with clay, stone or metal, but rather from a cherry tree in the center with Collin’s chainsaw.

The project, he said, took about four days and came about after a neighbor, for whom Collin made a play, told Davison Township’s superintendent of parks and recreation about his work. , Casey Reed, and she asked him to do one for the nature center.

“It was a really beautiful canvas to work on,” Collin said. “We ended up going with all the birds and I think we’ll do a few more benches in the park.”

He said there was also talk of making him a sculpture of an osprey at Lake Callis, in honor of such a bird which is often spotted there. 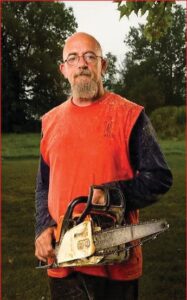 “I’ve always made art,” he says. “You name it, I did it. I did pencil portraits, oil portraits, I did a lot of airbrush painting in the 90s.”

Collin said he was “bouncing around” in different media until around 2000, when the auto industry hit hard times and at the plant where he worked, employees lost all their overtime.

He and a colleague, feeling the economic pinch of losing overtime, decided to look for ways to make extra money on the side.

“We found there were two things people would pay decent money for,” Collin said. “It was roofing and pruning trees. So we did a bunch of each for a while.

While working these side jobs, Collin said that from time to time they come across chainsaw carvings in people’s yards. He said they looked rough, but he found them inspiring and started thinking it was an art form he could try. 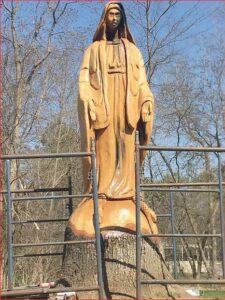 He said his friend convinced one of their clients to let them carve the cartoon character Garfield out of wood from his property, which turned out good and made him want to try other carvings. .

After that, he said they heard about a tournament in Oscoda, so they went there for the first time.

“I’m a pretty competitive guy, so I play a lot in tournaments,” Collin said. “Tournaments are split 50/50 or full with charities like Make-A-Wish, Center for the Blind and Cystic Fibrosis. It made it more fun to do.

Collin said the carving community is “most generous” both in displaying and sharing their talents and in sharing the wealth.

He said there are many tournaments where contestants will sculpt for a week straight and everything they do will go to charity.

Typical tournaments attract 50-60 carvers, while other larger events he’s seen in places like Pennsylvania attract over 250-300 carvers from around the world.

Collin said he continued to carve, meeting more people in the sculpture community and learning all he could about the art and ways to improve his work.

“I can’t even walk around without thinking about it,” he said. “I see things and I have ideas; I just want to grab a saw and go to work. I sometimes keep seeing things over and over again. You still have six sculptures in front of you.

The time required to complete a sculpture varies depending on its size and complexity. This can take from a few hours to several days.

Requests for carvings also vary, with many people wanting carvings of their dogs, human statues of Native Americans, and decorative benches.

One of his tallest statues was a 14-foot-tall Madonna in front of an old people’s residence in Clarkston, located on M-15 and the Dixie Freeway.

“I just like to do difficult pieces,” Collin said. “I’ve done dragons, mermaids – but I probably do more birds and dogs than anything else.”

He said he didn’t go to people’s classes when they ordered him to make a sculpture and told them what he thought was good. Instead, he asks what they would like him to do with the piece of wood or tree they have.

Often, Collin said, he’ll ask to visit their homes to see what kind of art they’ve featured there so he can get a better idea of ​​what they want before starting a sculpture.

“I want to know the flavor of what they’re looking for,” he said. “I want to do something really cool and something they feel part of.”

Collin said he gets a lot of requests for memorial dogs; in remembrance of a pet that someone has lost. He said memorial coins for deceased people are also popular, often carved into a tree that was special to the deceased.

“The creative ending is very satisfying and when you can make other people happy too, that’s something special,” Collin said. “Especially if you can choose something personal with them.”

For more about Collins and his sculptures, see stephcollin.com, send him an e-mail [email protected] or call him at 248-495-2332.