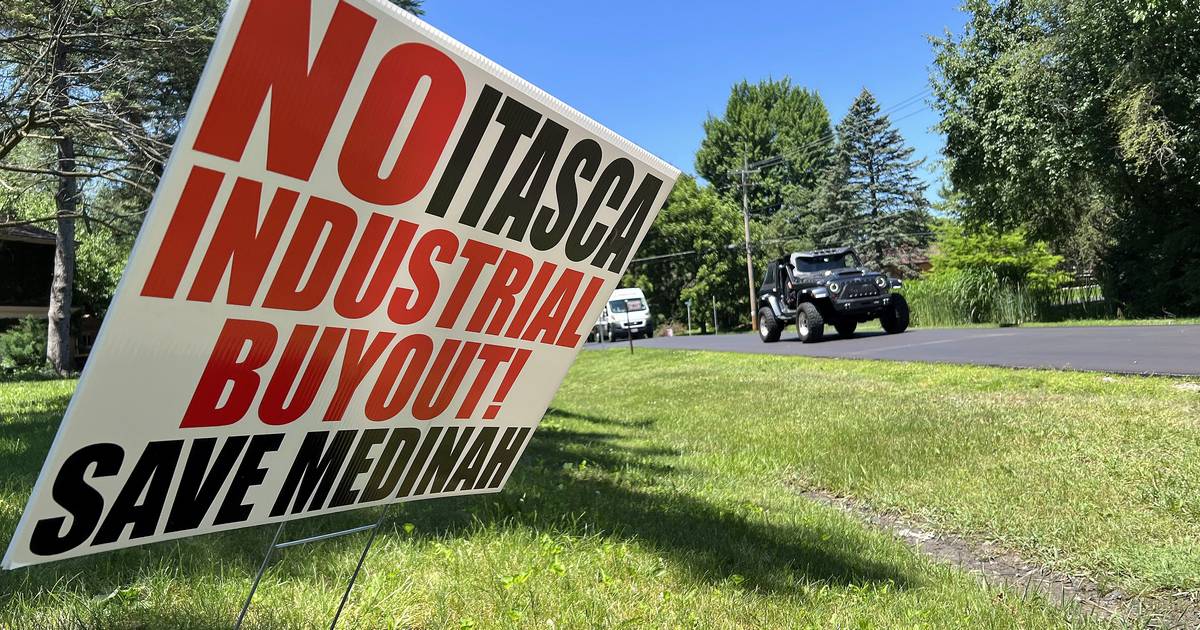 Christine Bending was one of the last holdouts in her old neighborhood near Wood Dale.

She initially refused a developer’s attempts to buy the house where she raised her four children. But as the homes around her were bulldozed, as she grew fed on the noise of planes and traffic in the shadow of O’Hare Airport, Bending relented last summer. Transwestern Development paid $775,000 for the four-bedroom on Bryn Mawr Avenue.

Bending left behind her 42-year-old home and moved to a three-bedroom ranch in a quiet corner of Medina. His living room furniture arrived in April. She redid her kitchen. She had just started to feel good.

“So this letter is coming,” she said.

A FedEx envelope left on her doorstep last week has brought the worst sort of deja vu: Transwestern Development is trying to buy her out again, this time targeting the Bending Ranch — and nearly 150 other homes — for demolition to make way for an industrial park.

Transwestern sent letters to Bending and its neighbors offering to pay each of them $22.50 per square foot for their properties. With over an acre of land, Bending would receive around $1 million. But she doesn’t move.

“That was all I wanted, and to have it taken down again? God, I’m coming – I don’t get it,” Bending said.

Developers have snapped up acres of housing in a booming industrial real estate market around O’Hare. In Bensenville, developers demolished the 106 homes in the Mohawk Terrace subdivision last year to build warehouses and other industrial buildings.

Transwestern is responsible for three similar projects at Wood Dale, two of which are fully constructed. The Houston-based developer bought and demolished nearly 30 homes in Wood Dale and replaced them with a 301,075 square foot warehouse for the North American headquarters of a Japanese logistics company.

“We fought, not like these people in Medina are fighting,” Bending said.

Other residents of the Medinah Terrace subdivision are determined to protect their homes in a 138-acre area bounded by Medinah Road to the west, the Metra Milwaukee-West rail lines to the south, Thorndale Avenue to the north and Hilltop Drive to the east. . Transwestern would seek to annex the area to the village of Itasca.

The plans have sparked a broader identity crisis in a DuPage County community that prides itself on independence and an unincorporated way of life. Residents posted red and black signs reading “I will not sell” and “Save Medina”.

Transwestern Development wants to buy nearly 150 homes in unincorporated Medinah near Itasca, which has met with resistance, although it has yet to come forward with plans.
– Brian Hill | Personal photographer

“People outside of the footprint are furious,” said Charlie Harth, who has lived in Medinah since 1992. .”

Nearly six years before the DuPage County charter was drafted, the Meacham brothers established holdings in 1833 in what is now Medinah. The unincorporated area was first named Meacham’s Grove.

But in the 1920s, when the founders of the Medinah Country Club arrived and bought the land from the Meachams, the area suddenly became Medinah.

“Medinah is an amazing little piece of oasis in the middle of suburban sprawl,” Harth said.

The houses are located on wooded lots of half an acre or more. There are no sidewalks or streetlights. “We’re pretty much self-sufficient,” Harth said.

Anna Rakowski clings to this rural character. She has yet to receive an offer from Transwestern, but her home on Glen Road is entering a potential second phase of development.

She started an online petition titled “Save Medinah – support families not businesses!“He had almost 1,900 signatures on Friday evening.

“She said, ‘Where am I going?’ How do you start over when you’ve lived your whole life in one house?” said Kristie Purner. “Where am I going to go?” Jackie Purner told her daughter-in-law after receiving a letter from a developer wanting to buy her house in Medinah, which was built in 1959.
– Courtesy of Kristie Purner

The Briargate Terrace home was built in 1959. Kristie Purner declined to say how much Transwestern was willing to pay for it.

Transwestern executive vice president Irv Gilner did not respond to a request for comment.

Itasca Mayor Jeff Pruyn responded to the brewing controversy in a lengthy letter this week. Pruyn clarified that no decision has been made by the village regarding the redevelopment.

“While there have been several discussions with staff, village officials and the developer,” Pruyn wrote, “Transwestern has chosen to first share its plans with residents of the Medina area before presenting its concept plan to the Itasca Village Council.”

The mayor noted that “the demand for industrial property in the region is at an all-time high.”

Bending was drawn to her Medina home for the land, the privacy, the trees her grandchildren could climb. It was the “answer to his prayers”.

“It’s heaven not just for me but for my family,” said Bending, an adjunct faculty member at the College of DuPage.

Transwestern paid him more — about $38 a square foot — for his old home less than a year ago than they offered him in Medina.