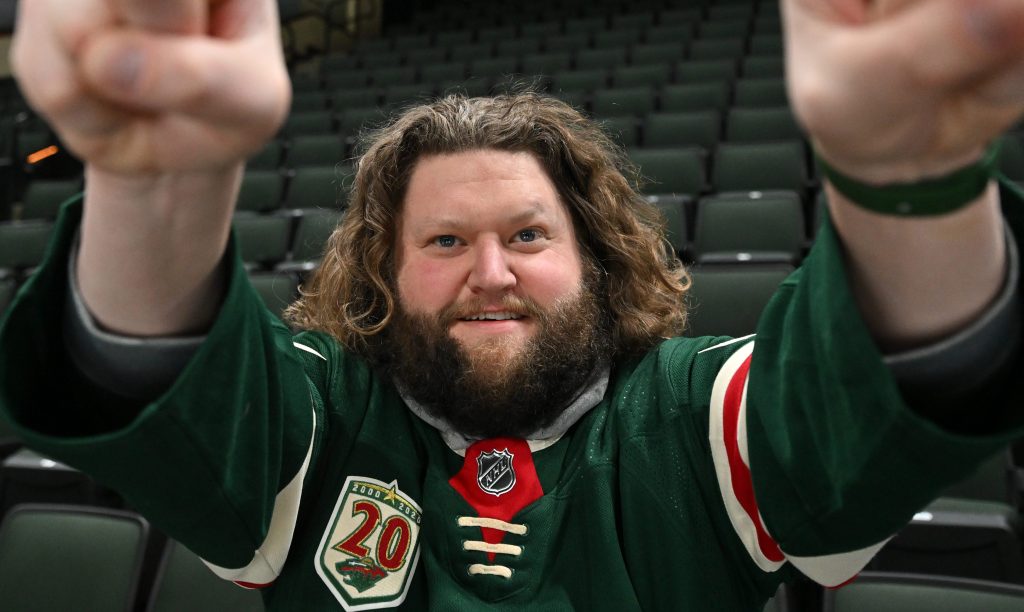 Anyone who attended a Wild game at the Xcel Energy Center this season would probably recognize Paul Anderson. Even if they don’t know him by name.

A season ticket holder for much of the past decade, the 38-year-old Anderson has become something of a downtown St. Paul folk hero in recent months.

You can spot him on the big board late in games, usually if the Wild is tied or on a goal. He points directly at the camera, then shouts at the top of his voice, imploring the fans around him to get up from their seats. His long hair and thick beard are unmistakable and perfectly sum up the moment itself.

“Everyone seems to like it,” Anderson said in an interview with Pioneer Press last week. “It rocks the place, which is the best part. I’ve seen this team pull it off so many times, so if I can help give them a little edge, I’ll do it.

His presence has the potential to play a part in the playoffs. With the Wild set to host the St. Louis Blues in Game 1 Monday night, home ice advantage has already been a major talking point heading into the first round. In that sense, someone like Anderson could make the difference.

“You hear the players say they can feel the energy of the fans,” said Anderson, who was born and raised in St. Paul. “I want to make sure I can do as much as I can.”

Although it’s become common for sports teams to hire plants from time to time – acts specifically designed to piss off the local crowd – there’s something poetic about a tradition that grows organically over the years. a season of 82 games.

This is exactly what happened with Anderson.

It all started on December 4 with the Wild hosting the Toronto Maple Leafs. After a home and away game for 60 minutes of playing time, the score was tied at the end of regulation. The home crowd was already extremely loud before extra time.

Then the camera pans to section 115.

“My fiancee tapped me on the shoulder and was like, ‘You’re on the big board,'” Anderson said. “I knew where the camera was set up, so I looked at it and went nuts.”

Shortly after, the Wild picked up a 4-3 shootout victory, and with that, the legend of Paul Anderson was born.

“Ever since that happened, the camera kind of searches for me,” Anderson said. “I honestly can’t hear the crowd when I do it. I guess the whole place is going crazy. But I’m screaming so loud the only thing I hear is myself.

In total, Anderson estimates he’s been on the big board more than a dozen times this season. His last appearance came on April 28 as the Wild hosted the Calgary Flames. The camera found Anderson just before the puck dropped in overtime, and 44 seconds into overtime, Kirill Kaprizov took the Wild to a 3-2 victory.

“It’s been a lot of fun,” Anderson said. “I like to annoy everyone. These players deserve all the energy we can give them. Because they have given us such a great show this season.

Perhaps the funniest part about all of this is that Anderson was actually getting upset with Section 115 long before he appeared on the big board.

“When I first got subscriptions, I had my two seats, then two seats behind me because I couldn’t have four seats together,” Anderson said. “We would split up and during the game I would get up and start yelling at my friends behind me if I felt like they were being too quiet. The whole section would sort of feed off of that.

Think of it as practice so he’ll be ready when the camera finally finds him.

“I’ve had people come up to me after games and say, ‘You weren’t on the big board tonight,'” Anderson said. “I love it when I’m not on the big board because it means we don’t need it. If we win and I’m not up there, I’m okay with that. But if we’re tied or behind on a goal and the camera finds me, I’ll bring it on.