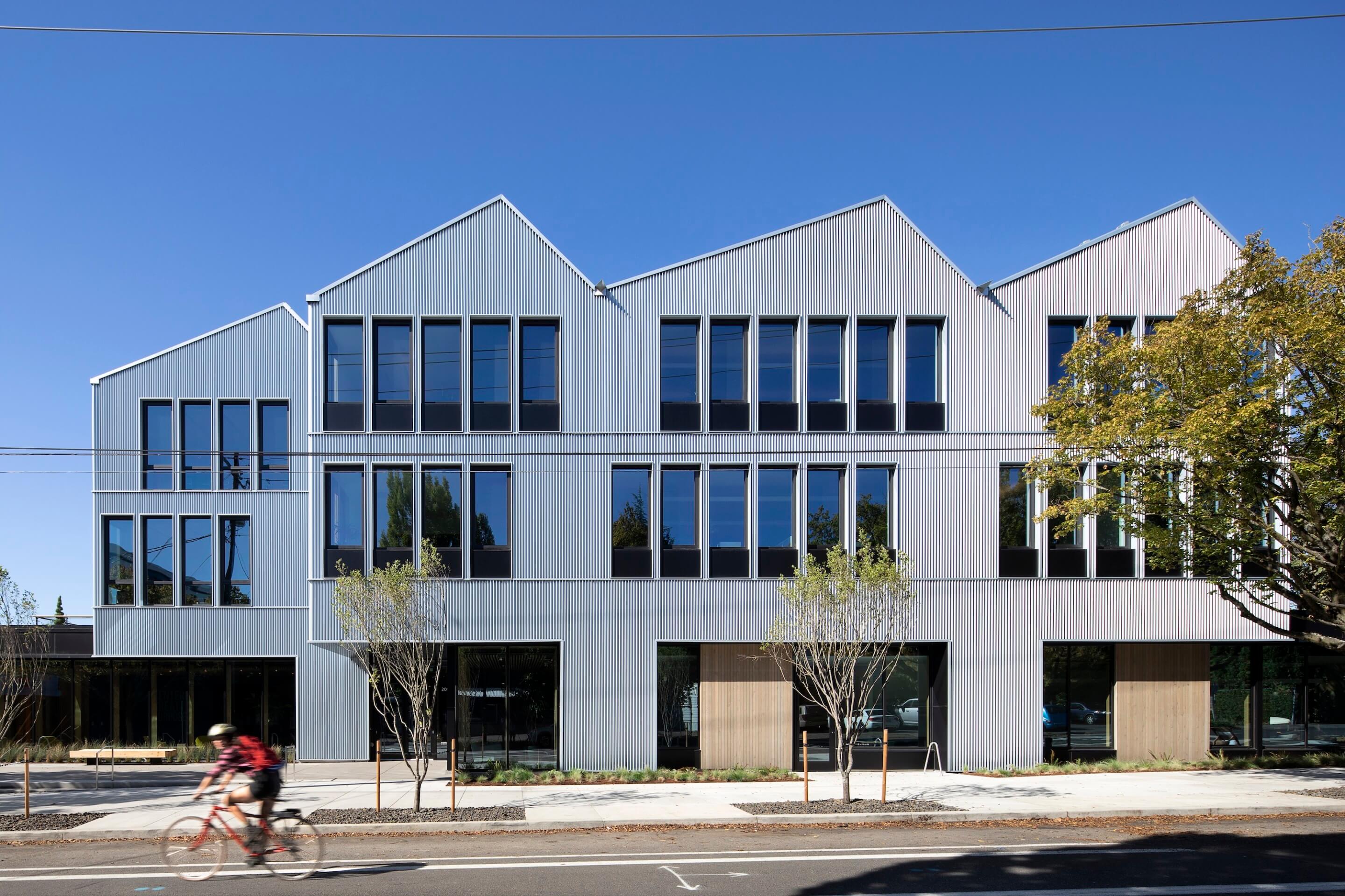 Adre is a Portland, Oregon-based development company that is less than two years old. Under the guidance of its founder Anyeley Hallová, it quickly made its presence felt.

At the AIA’s annual conference in Chicago last month, the next Killingsworth The office building was named one of six winning proposals in the Mass Timber Competition: Building to Net-Zero Carbon competition, organized by the US Forest Service and the Softwood Lumber Board. Killingsworth will promote social equity through its goal of working with 30% of BIPOC and contractors owned by women and obtaining 50% of its capital from women and/or people of color. That same month, the Oregon Land Conservation and Development Commission made Hallová its first ever black female chair.

In April, the Meyer Memorial Trust Headquarters in Portland, designed by LEVER Architecture, which Hallová helped oversee as a partner in his former firm Project^, was named to the AIA Committee on the Environment’s prestigious Top Ten Green Projects list. In July, this project was named one of ten winners of the Urban Land Institute competition ULI Americas Awards of Excellence 2022 and advances as a finalist in the organization’s 2022 ULI Global Awards for Excellence.

“Development is usually about making money for your investors or creating value for your nonprofit organization. It is fundamental,” said Hallová A. “None of these ideas exist outside of the merchant sector, and that’s what really interests me about the new venture.”

You could say that Hallová feels lucky. After all, Adre takes its name from the number seven in the West African Ewe language. Still, this developer is making its own mark, not just with a portfolio of pioneering sustainable design projects, but with a mission-driven approach. In Portland, with one of the smallest black populations of any major American city, as well as a statewide legacy of racial exclusion, this kind of leadership is even more remarkable.

“Anyeley uses development to build community,” said Michelle J. DePass, former CEO of the Meyer Memorial Trust. “She is a very proud black developer from the Pacific Northwest who knows she is rare. She’s not shy about holding onto that mantle and allowing others to dream of the world they want.

Hallová grew up in Florida near Fort Lauderdale, the daughter of a Ghanaian agricultural engineer. During her teenage years, the family spent two years living in drought-stricken northern Nigeria, which inspired her interest in ecology and design. After nearly a decade studying environmental systems (Cornell University), urban planning (Massachusetts Institute of Technology) and landscape architecture (Graduate School of Design at Harvard University), she first worked as a designer partner in AECOM’s Atlanta office, creating master plans for several Caribbean cities.

“[AECOM is] where I had early training in thinking about the three-legged stool of sustainability: the social, the environmental, and the economic,” Hallová recalls. “But social sustainability has been ignored until the past two years.”

Moving to Portland in 2007, she landed at Gerding Edlen Development, helping to deliver some of the first LEED-rated housing projects on the West Coast. Then, as a partner in developer Portland Project^ from 2009, she married sustainability to design excellence on award-winning projects like the Origami multi-family complex by Waechter Architecture (which innovatively combined condos, townhouses and ADUs) and a local headquarters of The Nature Conservancydesigned by LEVER Architecture.

“We would send him the plans for the building, and he would come back with about 200 red marks,” recalls LEVER Architecture founder Thomas Robinson. “She dives into the details of the design, always thinking of ways to make things better, but very thorough, very thoughtful and really helpful.”

Perhaps Hallová’s most influential project with Project^ went unbuilt. Designed in 2017 by LEVER Architecture, Frame was set to become the nation’s first solid wood skyscraper after winning a $1.5 million grant from the United States Department of Agriculture to test and prove the fire resistance of laminated wood- cross. The project, which was canceled largely due to post-2016 changes in the affordable housing tax credit market, provided a hard-won lesson and epiphany.

“I did everything anyone could do to try and get a project done,” Hallová said. “I thought, ‘What if I take that same energy and pour it out into the black community? “”

His last project before founding Adre was a new headquarters for one of Portland’s largest philanthropic organizations in the historically black neighborhood of Albina. The effort defined his career. The LEED Platinum-rated Meyer Memorial Trust’s headquarters, completed in 2020, was split into two buildings – one framed in cross-laminated timber and the other traditionally built like a house – so it would be easier to work with smaller entrepreneurs (many including minority and/or women-owned businesses) as well as journeypersons and apprentices.

“There were a lot of eyes on us. I felt intense pressure not to be a gentrifier, and Anyeley understood that perfectly,” DePass recalled. remember that we were doing this to prove it could be done. And that really is Anyeley. She doesn’t let anything stand in her way. And she does it with humor and grace.”

One of Adre’s upcoming projects takes the ideas of Meyer’s headquarters even further. Adre is developing a new head office, Building United Futures, for the non-profit Black United Fund; the structure will house several other non-profit organizations and business incubation spaces. There is a bigger idea at work: it hopes to stem what LM Alaiyo Foster, president of the Plain black background, calls a “volley of talent” of young BIPOC Portlanders. “It’s a big part of when you feel like you belong, when you’re part of something,” she said.

In July, Adre was named developer for the highly publicized Williams & Russell Redevelopment Project on a plot of land vacant for decades where officials forcibly moved more than 120 black families in the 1970s for a never-built hospital extension. In a historic public-private partnership, the land was returned to the community and Adre is developing the land with the Williams & Russell Community Development Corporation (CDC). A mix of offices, apartments and townhouses designed by LEVER Architecture to suit a variety of income levels, with an emphasis on intergenerational living and pathways to home ownership. A variety of streets and shared landscaped spaces will foster a sense of community.

Adre was one of two commission finalists, and according to Bryson Davis, chairman of the CDC Williams & Russell board and attorney at PNW Business, the other proposal was more architecturally flashy. Adre won because of how Hallová understood the big picture and how she listened. “Instead of asking the entire market, ‘What do you want to buy?’ Adre asks the local community: “What do you think is needed here? Anyeley is able to communicate all of that in a way that puts people at ease,” Davis said. “She brings a really upbeat energy.”

“[Hallová is] able to balance those social pursuits she is passionate about with the capitalist machine she works in,” said El Dorado partner Josh Shelton. “That’s one of the things about Anyeley: her decision to face the world in her own way.”

And these terms are ultimately meant to democratize and spread the impact of green design principles, not just to save resources or reduce carbon, but to plant deeper seeds of change. “For me, it’s not sustainable if it’s just ecologically sustainable [and] different constituencies and parts of the community don’t feel like they belong,” Hallová said. “It’s about telling stories in the landscape.”

Brian Libby is a Portland-based architecture and arts journalist and has written for The New York Times, Metropolisand To live in.