The Center for Integrated Services for Children holds a grand opening

The Center for Integrated Services for Children holds a grand opening

The grand opening of the new 60,000 square foot Integrated Children’s Service Center was held on November 18. Pictures of Gary Gould

FLINT –Construction of the new state-of-the-art Children’s Integrated Services Center is complete and the new facility, located at S. Saginaw Street and I-69, officially opened with a ribbon-cutting ceremony Nov. 18.

Genesee Health System (GHS) and Greater Flint Mental Health Facilities hosted the groundbreaking ceremony for the facility that brings comprehensive care to children in Flint and Genesee County in one location.

The 60,000 square foot building, located at 1402 S. Saginaw St., will consolidate all of SGH’s children’s program areas into one building, including the Children’s Integrated Services Assessment Clinic, Autism Center and child and family services.

Danis Russell, CEO of Genesee Health System, thanked all of GHS’ partners in the project, who together completed the $23 million facility.

“Things like this don’t happen very often,” he said. “This project – the community collaboration, the sources of funding, the people who were involved in it – it just doesn’t happen for a place that provides mental health services primarily to the city’s uninsured population.” 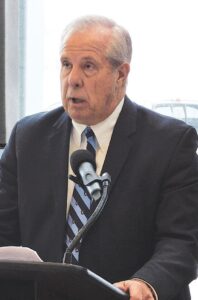 Tim Herman, president of the Uptown Reinvestment Group and CEO of the Flint & Genesee Group.

The facility, located at S. Saginaw and Ninth Street at the I-69 bridge, combines three separate buildings used by GHS to house its core services for children and families under one roof.

These include the Neurodevelopment Center of Excellence (NCE), Autism Services, Child and Family Services, and a federally licensed health care center.

Additionally, the new building provides family-friendly waiting areas, as the assessment process takes an average of four hours, requiring families to find space for an extended period of time. This is especially difficult for families with several children.

The new design includes: a café, an outdoor plaza, a safe play area and other comfortable waiting areas.

Project partners included the City of Flint, Uptown Reinvestment Corporation and the Mott Foundation. HED was the architectural firm that designed the building and contractor DW Lurvey built it. 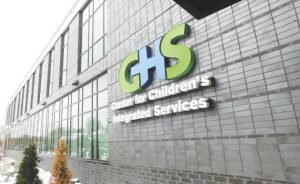 The exterior of the Center for Children’s Integrated Services, 1402 S. Saginaw St.

“This children’s center is due to a partnership with the Uptown Reinvestment Corporation in addition to the early and ongoing support of the Mott Foundation,” said Bill Winiarski, Chairman of the Board of Greater Flint Children’s Mental Health Facilities, Inc. Now, anyone receiving children’s services from GHS will be welcome at this beautiful, state-of-the-art facility for quality one-stop mental and physical health care.

Tim Herman, President of Uptown Reinvestment Group and CEO of Flint & Genesee Group, said it was a great day for URC and for the children of the community, further calling the facility an “achievement”.

“As a nonprofit economic developer, part of our goal at URC is to help other nonprofits by providing capacity, especially on complex projects like this,” said said Herman. “We are delighted to be associated with GHS on this project. This has a long term impact and a positive impact. 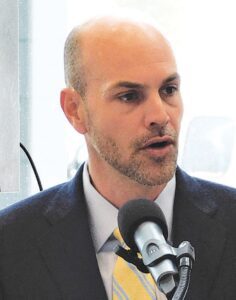 Ridgway White, President and CEO of the Charles Stewart Mott Foundation, said many community teams were involved in funding and building the Children’s Integrated Service Center.

“We work harder than anyone else, with less sometimes, but we accomplish great things,” White said. “The Integrated Children’s Service Center is designed to better serve children and families.

An open house allowing the community to visit the new facilities will be held on Wednesday, November 30. 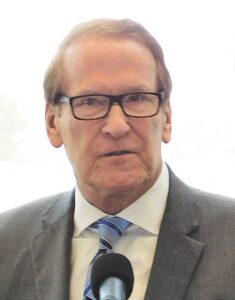