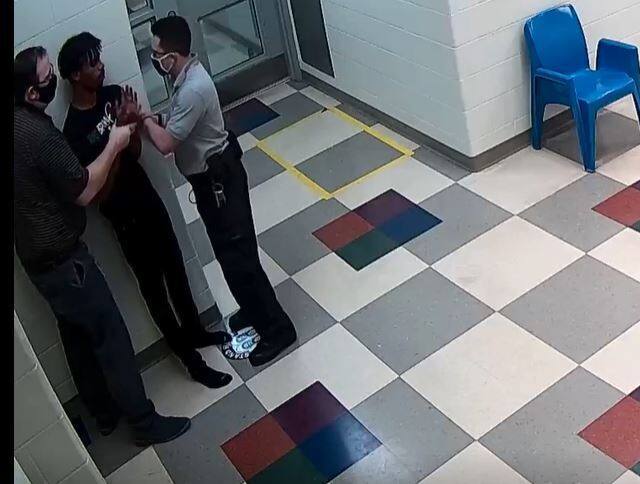 WICHITA, Kan. – Surveillance video shows a 17-year-old black man grappling with staff at a Wichita juvenile center last fall before dying after being held face down for more than 30 minutes.

Sedgwick County released 18 video clips on Friday afternoon of what happened before Cedric Lofton was rushed to hospital on September 24. He died two days later.

The release of the clips followed the announcement by Sedgwick County Prosecutor Marc Bennett Tuesday which state “stand your ground” law prevented him from pressing charges because staff members were protecting themselves. He also said he struggled to know if a charge of manslaughter was warranted, but concluded that it was not.

The County of Sedgwick webpage crashed after the video was posted, making it temporarily inaccessible. But The Wichita Eagle released screenshots of the encounter, and several Wichita-area television stations released snippets of some of the roughly two hours of footage, which did not include audio.

Video shows several officers carrying Lofton into the Sedgwick County Juvenile Intake and Assessment Center as they are restrained in something called the WRAP, a device consisting of a lockable shoulder harness, leg restraints and ankle straps. The sheriff’s office describes it as a way to restrain an “out of control” person so they don’t hurt themselves or others.

But the 5-foot-10, 135-pound Lofton resisted officers responding to the house, assaulting at least one of them, according to Bennett’s report.

The WRAP was terminated at the juvenile reception center, according to Bennett’s report. An unrestrained Lofton emerged from his holding cell and then tried to grab a computer screen at the admissions counter.

Video shows him resisting attempts to place him back in the holding cell. At one point, he can be seen punching one of the juvenile detention workers in the head.

Video shows detention officers ushering him into the cell and other staff showing up to help him. The camera does not show a close angle of what is happening inside the cell.

Bennett’s report says staff chained Lofton’s ankles and put him face down on the floor. His report stated that Cedric sometimes “mumbled”, repeated that he was Jesus and said that the staff should kill themselves and that he would “bewitch” them. Staff noticed he was not breathing after calling to arrange transport for Loftin to hospital for a mental health assessment.

KSNW reported that after about 30 minutes face down in the cell, video appears to show the workers flipping Lofton onto their backs. They eventually start CPR and the paramedics arrive.

This story has been updated to correct KSNW’s call letters. The station had been mistakenly called KSNT.